Daniella Gitlin and the other wonderful volunteers at Word Up Bookshop in New York have made available videos of the Rhina Espaillat Symposium which took place in October. It was a memorable day. People came from as far away as Los Angeles to show their admiration and affection for Rhina, and she, of course, reflected all that loving energy right back on us. I’ve been comparing her to a mirror ball when I talk about what happened that day.

So much happened that day. These videos are studded with gems. Leslie Monsour borrowed John Tavano’s guitar to sing —beautifully— a song she’d composed using one of Rhina’s Spanish poems as lyrics. Harvard Professor Lorgia García Peña revealed that, ever since hearing Rhina read at Dartmouth over ten years ago,  she has carried Rhina’s poems with her as a daily source of inspiration. Paula Dietz of The Hudson Review celebrated her friendship with Rhina. The young scholar Dan-el Padilla Peralta delivered a riveting essay. Juan Matos read his poetry with a passion that moved even the Spanish-challenged, like myself. Nancy Kang and Silvio Torres-Saillant, authors of the first full-length study of Rhina’s life and work, presented new papers. It’s impossible to list all the treasures to be found in this trove. It’s worth coming back to, whenever you want to be reminded what literary community looks and feels like. Here’s a link to the links: Rhina Espaillat Symposium

Here’s a terrific video put together by Ely Campaneau to celebrate the the five-year anniversary of The Frost Farm Poetry Conference in Derry, NH 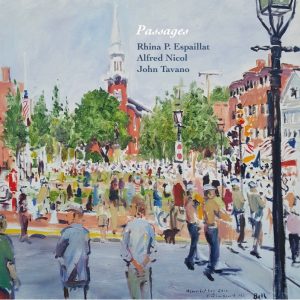 The Newburyport Literary Festival is happening this weekend. Here is the complete schedule. It’s going to be a beautiful day!

The Boston National Poetry Month Festival arrives every April like poetry’s Opening Day. I’ll be one of the Thirteen Keynote Poets reading in The Commonwealth Salon at 700 Boylston Street on Friday, April 7. And on Friday evening, as part of the Poetry, Music and Dance Concert, Anne-Marie Codur and Jill Borenstein will perform “La Girafe,” a song I wrote with guitarist John Tavano.

Over the past two decades, The West Chester Poetry Conference has played a central role in shaping American poetry. You’ll get a hint of why the conference has been a game-changer for so many people when you watch this video.

Here’s a poem that I honestly considered overwrought when Rhina brought it to The Powow River Poetry Workshop many months ago, because who then could have believed that Donald Trump’s campaign would ever gain any traction? The poem sounds a lot wiser now. Thanks to Micah Mattix, editor of Prufrock, for sending out this link to “After the Rally” by Rhina Espaillat, originally published in The Hudson Review.